The purpose of an air compressor is to provide a continuous supply of pressurized air. An air compressor is a machine to compress the air and to raise its pressure. The air compressor sucks air from the atmosphere, compresses it and then delivers the same under high pressure to a storage vessel. From the storage vessel, it may be conveyed by the pipeline to a place where the supply of compressed air is required. Since the compression of air requires some work to be done on it, therefore a compressor must be driven by some prime mover.

There is little difference between the principle of operation of compressors and pumps. One of the major differences is that for compressors we are dealing with a compressible fluid and it is that that leads us to the two basic classes, dynamic and positive displacement. Industrial uses of Compressed Air is used for many purposes such as for operating pneumatic drills, riveters, road drills, paint spraying, in starting and supercharging of internal combustion engines, in gas turbine plants, jet engines, and air motors, etc. It is also utilized in the operation of lifts, rams, pumps and a variety of other devices. Compressed air is also used for producing a blast of air in blast furnaces and Bessemer converters.

The principal applications of compressed air in Power Plants are as follows :

Dynamic Air Compressors
Dynamic compressors use rotating elements to accelerate air. By diffusing action, velocity is converted to static pressure. The total energy in a flowing air stream is constant. Entering an enlarged section, flow speed is reduced and some of the velocity energy turns into pressure energy. Thus static pressure is higher in the enlarged section. The dynamic class includes centrifugal and axial compressors.

Axial flow compressors accelerate air in a direction generally parallel to the shaft. Units resemble turbines; each pair of moving and stationary blade-rows forms a stage. Pressure rise per stage is relatively small. As the pressure rise is very small across a row of blades, many stages are used.

The rotary compressor is adaptable to direct drive by induction motors or multi-cylinder gasoline or diesel engines. The units are compact, relatively inexpensive, and require a minimum of operating attention and maintenance. They occupy a fraction of the space and weight of a reciprocating machine of equivalent capacity. Rotary compressor units are classified into three general groups, slide vane-type, lobe-type, and liquid seal ring-type.

These compressors present a more complex problem because of surging. This occurs when the flow falls below a certain value. Surging is when the flow becomes unstable because of secondary circulation created in the blade passages. This causes the flow as a whole to pulse and may damage the blading. The most common flow control arrangement used on centrifugal and axial flow compressors is the variable speed drive.

Types of Valves with images 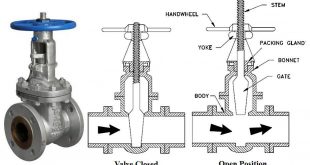